Apple uses iOS as operating system for all its mobile devices including phones, tablets and music players. It provides a single platform for development for all form factors of the devices.

Apple’s tight control and sometimes opaque policies result in a lot of heartburn for the developers and app owners when the apps are rejected without sufficient reason. It also takes a couple of days some times for the apps to go live on ITunes.

However this tight control, demand for quality and respect for its user’s privacy in addition to its great look and feel, Apple devices have a fan following which would have been hard to imagine before that.

IOS is a proprietary operating system under tight control of Apple. It has resulted in an unfragmented ecosystem. IOS users typically upgrade their devices to the latest version of available OS in a relatively short period of time. App developers can be sure that most of their users will be able to use new features that they develop for this platform.

iOS SDK supports development of apps for all purposes, however many 3rd party SDK’s particularly for game development are also available.

WE have a dedicated IOS developers team, who will work closely with your requirements and deliver the best of Technology. Looking at the many benefits of IOS Mobile development, whatever your business needs Kaira Software will handle it. 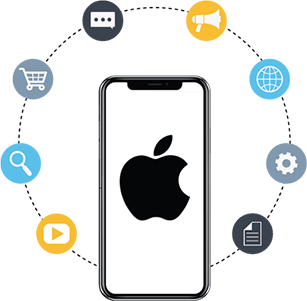